Older manufacturing companies commonly have space constraints because of long-term growth, especially those in the northern states. When customers with older buildings want to add new machinery, space is usually limited because the machinery can impede fork truck traffic and personnel access aisles. 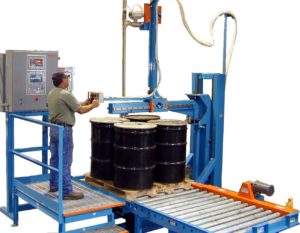 A well-known manufacturer of coating products created a new superior chemical and wanted to add a new drum and tote filling machine for the new product. They already had two of our drum filling systems at this particular plant and several more at other plants.

The customer’s building in the northeast had limited floor space, so they asked us to create a drum and tote filling machine that would fit into a space the size of a bathroom. They said it was a batch filling operation for 55-gallon drums and 275-gallon totes and the liquid was flammable.

The actual space was a 12’ x 12’ room with brick walls to isolate it from others, because of the flammable product.

Since this was a batch filling operation, not a production line, we designed an in/out filling system where the drop-off point was also the pick-up point. A fork truck would drop-off a pallet of empty drums and return within five minutes to remove it and place another. The pallet or tote would convey into the filling station and stop automatically by photo eye recognition. 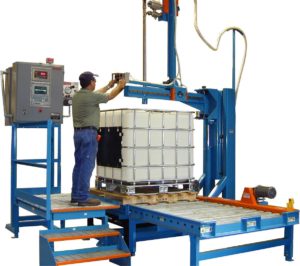 When the operator finishes filling the four drums, or tote, he would press a button and both the filling conveyor and the load/unload conveyor would power up in reverse. When a new load of empties was dropped off, the operator would press a button to convey it into the filling station again. We included a Type X nitrogen purge to accommodate the class 1, division 1 hazardous electrical requirements.

The new filling operation produced 20 filled drums per hour, which was more than adequate for the operation. Since the customer did not need to invest tens of thousands of dollars to build an outside shed with special piping, they saved quite a bit. The payback was actually from cost avoidance.